News Feed Comments
You are here: Home / Featured / The secret to an easy Hummus Recipe

The secret to an easy Hummus Recipe

Hummus is a dip/spread that is made from chickpeas. In fact, hummus is the Arabic word for chickpea. You may notice that many hummus recipes call for garbanzo beans, not chickpeas. Don’t worry, garbanzo is the Spanish translation of chickpea. They are called cece beans in Italy.

Hummus is one of the oldest foods dating back to ancient Egypt. We know that chickpeas were used quite frequently over 7,000 years ago.

Hummus (a transliteration of the Arabic: حمّص‎; also spelled hamos, houmous, hommos, hommus, hummos, hummous or humus; see romanization of Arabic) is a Levantine Arab[1] dip or spread made from cooked, mashed chickpeas, blended with tahini, olive oil, lemon juice, salt and garlic. It is a popular food throughout the Middle East.

Everyone in the Middle East make their hummus different. Some like their hummus recipe to have a strong lemon flavor, some have an overwhelming garlic flavor, and some hummus has a spicy tone.  When making your own hummus, you have to keep your own taste buds in mind. If a recipe calls for a lot of tahini and you don’t like tahini, scale down the amount. The fun about Middle Eastern cooking is that the ingredient amounts aren’t set in stone. Add a little of this and take away that and you still have a culinary masterpiece!

Since there is a million different hummus recipes out there.  Here my recipe that’s been used by my family and handed down for generation. The above recipe is my own recipe that has been in my family for generations, If you are looking for a more creamy hummus recipe similar to the ones you get at the middle eastern restaurants then try this link on how to make a creamy hummus like a pro. 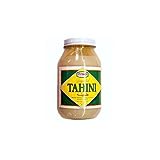 Tahini is made of hulled sesame seeds that have been roasted and ground into a delicious paste. This spread can also be used as a healthy alternative to butter and margarine on bread and toast. It is known to be rich in protein and is incorporated into many Middle Eastern dishes such as Hummus and Baba Ghanoug.Lebanon.

One Response to “The secret to an easy Hummus Recipe”

Check out what others are saying about this post...